The guidelines for contributors are simple:

Niccolò Machiavelli (Italian: [nikkoˈlɔ makjaˈvɛlli]; 3 May 1469 – 21 June 1527), or more formally Niccolò di Bernardo dei Machiavelli, was an Italian Renaissance historian, politician, diplomat, philosopher, humanist, and writer.[1][2] He has often been called the founder of modern political science.[3] He was for many years a senior official in the Florentine Republic, with responsibilities in diplomatic and military affairs. He also wrote comedies, carnival songs, and poetry. His personal correspondence is renowned in the Italian language. He was secretary to the Second Chancery of the Republic of Florence from 1498 to 1512, when the Medici were out of power. He wrote his most renowned work The Prince (Il Principe) in 1513. 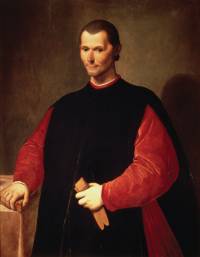 “Machiavellianism” is a widely used negative term to characterize unscrupulous politicians of the sort Machiavelli described most famously in The Prince. Machiavelli described immoral behavior, such as dishonesty and killing innocents, as being normal and effective in politics. He even seemed to endorse it in some situations. The book itself gained notoriety when some readers claimed that the author was teaching evil, and providing “evil recommendations to tyrants to help them maintain their power.”[4] The term “Machiavellian” is often associated with political deceit, deviousness, and realpolitik. On the other hand, many commentators, such as Baruch Spinoza, Jean-Jacques Rousseau and Denis Diderot, have argued that Machiavelli was actually a republican, even when writing The Prince, and his writings were an inspiration to Enlightenment proponents of modern democratic political philosophy.[5][6][7] In one place for example he noted his admiration for the selfless Roman dictator Cincinnatus.[8]

Machiavelli was born in Florence, Italy, the third child and first son of attorney Bernardo di Niccolò Machiavelli and his wife,were Bartolomea di Stefano Nelli.[9] The Machiavelli family is believed to be descended from the old marquesses of Tuscany and to have produced thirteen Florentine Gonfalonieres of Justice,[10] one of the offices of a group of nine citizens selected by drawing lots every two months and who formed the government, or Signoria; but he was never a full citizen of Florence because of the nature of Florentine citizenship in that time even under the republican regime. Machiavelli married Marietta Corsini in 1502.[11]

Machiavelli was born in a tumultuous era in which popes waged acquisitive wars against Italian city-states, and people and cities often fell from power as France, Spain, the Holy Roman Empire, and Switzerland battled for regional influence and control. Political-military alliances continually changed, featuring condottieri (mercenary leaders), who changed sides without warning, and the rise and fall of many short-lived governments.[12]

Machiavelli was taught grammar, rhetoric, and Latin. It is thought that he did not learn Greek even though Florence was at the time one of the centers of Greek scholarship in Europe. In 1494 Florence restored the republic, expelling the Medici family that had ruled Florence for some sixty years. Shortly after the execution of Savonarola, Machiavelli was appointed to an office of the second chancery, a medieval writing office that put Machiavelli in charge of the production of official Florentine government documents. Shortly thereafter, he was also made the secretary of the Dieci di Libertà e Pace.

In the first decade of the sixteenth century, he carried out several diplomatic missions: most notably to the Papacy in Rome. Moreover, from 1502 to 1503, he witnessed the brutal reality of the state-building methods of Cesare Borgia (1475–1507) and his father, Pope Alexander VI, who were then engaged in the process of trying to bring a large part of Central Italy under their possession. The pretext of defending Church interests was used as a partial justification by the Borgias. Other excursions to the court of Louis XII and the Spanish court influenced his writings such as The Prince.

Between 1503 and 1506, Machiavelli was responsible for the Florentine militia. He distrusted mercenaries (a distrust that he explained in his official reports and then later in his theoretical works for their unpatriotic and uninvested nature in war that makes their allegiance fickle and often too unreliable when most needed) and instead staffed his army with citizens, a policy that was to be repeatedly successful. Under his command, Florentine citizen-soldiers defeated Pisa in 1509.

However, Machiavelli's success did not last. In August 1512 the Medici, backed by Pope Julius II used Spanish troops to defeat the Florentines at Prato, but many historians have argued that it was due to Piero Soderini's unwillingness to compromise with the Medici, who were holding Prato under siege. In the wake of the siege, Soderini resigned as Florentine head of state and left in exile. The experience would, like Machiavelli's time in foreign courts and with the Borgia, heavily influence his political writings.

Machiavelli's cenotaph in the Santa Croce Church in Florence After the Medici victory, the Florentine city-state and the republic were dissolved, and Machiavelli was deprived of office in 1512. In 1513 the Medici accused him of conspiracy against them and had him imprisoned. Despite having been subjected to torture (“with the rope” in which the prisoner is hanged from his bound wrists, from the back, forcing the arms to bear the body's weight and dislocating the shoulders), he denied involvement and was released after three weeks.

Machiavelli then retired to his estate at Sant'Andrea in Percussina, near San Casciano in Val di Pesa, and devoted himself to studying and writing of the political treatises that earned his place in the intellectual development of political philosophy and political conduct.[13]

Despairing of the opportunity to remain directly involved in political matters, after a time, he began to participate in intellectual groups in Florence and wrote several plays that (unlike his works on political theory) were both popular and widely known in his lifetime. Still, politics remained his main passion and, to satisfy this interest, he maintained a well-known correspondence with more politically connected friends, attempting to become involved once again in political life.[14]

In a letter to Francesco Vettori, he described his exile:

When evening comes, I go back home, and go to my study. On the threshold, I take off my work clothes, covered in mud and filth, and I put on the clothes an ambassador would wear. Decently dressed, I enter the ancient courts of rulers who have long since died. There, I am warmly welcomed, and I feed on the only food I find nourishing and was born to savor. I am not ashamed to talk to them and ask them to explain their actions and they, out of kindness, answer me. Four hours go by without my feeling any anxiety. I forget every worry. I am no longer afraid of poverty or frightened of death. I live entirely through them.[15]

Machiavelli died in 1527 at 58 after receiving his last rites.[16] He was buried at the Church of Santa Croce in Florence. An epitaph honoring him is inscribed on his monument. The Latin legend reads: TANTO NOMINI NULLUM PAR ELOGIUM (“So great a name (has) no adequate praise” or “No eulogy (would be) a match for such a great name”).

The Prince Main article: The Prince Machiavelli's best-known book Il Principe contains several maxims concerning politics. Instead of the more traditional target audience of a hereditary prince, it concentrates on the possibility of a “new prince”. To retain power, the hereditary prince must carefully balance the interests of a variety of institutions to which the people are accustomed. By contrast a new prince has the more difficult task in ruling: He must first stabilize his newfound power in order to build an enduring political structure. Machiavelli suggests that the social benefits of stability and security can be achieved in the face of moral corruption. Machiavelli believed that public and private morality had to be understood as two different things in order to rule well. As a result, a ruler must be concerned not only with reputation, but also must be positively willing to act immorally at the right times. Machiavelli believed as a ruler, it was better to be widely feared than to be greatly loved; A loved ruler retains authority by obligation while a feared leader rules by fear of punishment.[17] As a political theorist, Machiavelli emphasized the occasional need for the methodical exercise of brute force or deceit including extermination of entire noble families to head off any chance of a challenge to the prince's authority.

Scholars often note that Machiavelli glorifies instrumentality in statebuilding, an approach embodied by the saying “The ends justify the means.” It should be noted that this quote has been disputed and may not come from Niccolò Machiavelli or his writings. Violence may be necessary for the successful stabilization of power and introduction of new legal institutions. Force may be used to eliminate political rivals, to coerce resistant populations, and to purge the community of other men strong enough of character to rule, who will inevitably attempt to replace the ruler. Machiavelli has become infamous for such political advice, ensuring that he would be remembered in history through the adjective, “Machiavellian”.

Lorenzo di Piero de' Medici to whom the final version of The Prince was dedicated. Notwithstanding some mitigating themes, the Catholic Church banned The Prince, putting it on the Index Librorum Prohibitorum. Humanists also viewed the book negatively, including Erasmus of Rotterdam. As a treatise, its primary intellectual contribution to the history of political thought is the fundamental break between political realism and political idealism, due to it being a manual on acquiring and keeping political power. In contrast with Plato and Aristotle, Machiavelli insisted that an imaginary ideal society is not a model by which a prince should orient himself.

Concerning the differences and similarities in Machiavelli's advice to ruthless and tyrannical princes in The Prince and his more republican exhortations in Discourses on Livy, many have concluded that The Prince, although written as advice for a monarchical prince, contains arguments for the superiority of republican regimes, similar to those found in the Discourses. In the 18th century, the work was even called a satire, for example by Jean-Jacques Rousseau.[18][19] More recently, commentators such as Leo Strauss and Harvey Mansfield have agreed that The Prince can be read as having a deliberate comical irony.[20]

Other interpretations include for example that of Antonio Gramsci, who argued that Machiavelli's audience for this work was not even the ruling class but the common people because the rulers already knew these methods through their education.

Main article: Discourses on Livy The Discourses on the First Ten Books of Titus Livy, published in 1531, written 1517, often referred to simply as the “Discourses” or Discorsi, is nominally a discussion regarding the classical history of early Ancient Rome although it strays very far from this subject matter and also uses contemporary political examples to illustrate points. Machiavelli presents it as a series of lessons on how a republic should be started and structured. It is a larger work than The Prince, and while it more openly explains the advantages of republics, it also contains many similar themes. Commentators disagree about how much the two works agree with each other, frequently referring to leaders of democracies as “princes”. It includes early versions of the concept of checks and balances, and asserts the superiority of a republic over a principality. It became one of the central texts of republicanism, and has often been argued to be a superior work to The Prince.[21]

Except where otherwise noted, content on this wiki is licensed under the following license: CC Attribution-Share Alike 4.0 International